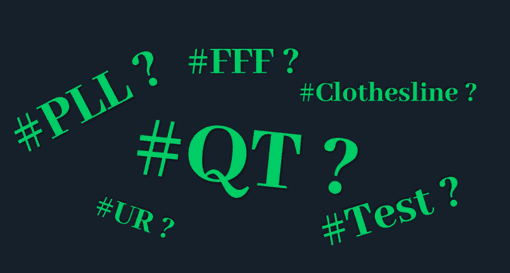 On Twitter I add a hashtag ‘#’ in front of the acronym in order to allow for an easy search via twitters built-in search function.

How to use Twitter’s powerful search function:

Then you sort the outcome via “Latest”.

If you are interested in a specific time-period simply go to Advanced Search.

All hashtags below will be added to tweets if they apply. The hashtags are NOT case sensitive.

#member Tweets which are only relevant for members.

#offtopic This hash marks any tweet which is not relevant trading information. I try to keep those at a minimum.

#market Tweets which are not stock specific bur rather provide information about the general market and market timing.

#scaleout Chart provides a logical scale-out opportunity by hitting the clothesline or another major resistance level.

#TOSS Test of Support Setup. A long setup based on a proper retest of support.

#TORS Test of Resistance Setup. A short sale setup based on a proper retest of resistance.

#CLXS Climax Setup: An opportunistic short selling setup where you short directly into a strong peak, preferably into a century mark, clothesline or PLL in combination with a large price extension above the 10d MA.

#LDOS Long Discrete Opportunisitic Setup: A setup which provides a good profit/risk level on the long side based on technical chart action

#SDOS Short Discrete Opportunisitic Setup: A setup which provides a good profit/risk level on the short side based on technical chart action

#WOP Window of Opportunity. This term describes the -oftentimes- brief periods in the market where you should try to seek active entries or even start to trade on margin. The market moves in phases and you can’t expect to make steady profits throughout the year. More often than not you will make the chunk of your anual profts during a couple brief windows of opportunity. Try to be in a strong mental position before such periods show up.

Risk multiple The term ‘R-multiple’ was coined by Dr Van Tharp and I picked it up a couple years back. However it is just another name for the profit to risk ratio of a single trade. You simply divide the profit of a trade by the risk you took. Both parameters are measured as a % of your total equity. So it is based on your account size and not on chart level.

#FFF Fade to Fake to Flat IPO chart pattern. This is not just a general pattern, it is also a trading setup where the flat phase triggers the entry. During the flat phase you want the daily closes to be confined to a PLL zone but don’t be too strict. Oftentimes there is a proper QTS on top.

#PLL Peak Liquidity Level. This is a term I coined to better describe a high volume level in the volume-by-price indicator.

#LLL Low Liquidity Level or volume void: This is the opposite of the Peak Liquidity Level explained above. Between high volume levels there is usually a price range where little trading took place. A stock needs net buying/selling in order to make it through that LLL. Such a move is therefore much more significant compared to price fluctuations inside a PLL zone.

#QTS Quiet and tight setup. A pullback into a PLL or short term moving average on low volume and with a tight daily trading range compared to the typcial average true range of the respective stock.

#URS Undercut and rally stock setup. A typical Wyckoff price and volume pattern where price undercuts a meaningful prior low in the chart and then rallies just to close back above that low line. Can be a one or two-day affair.

#IPO Stocks which came public in the recent past.

Clothesline: An upper trendline on a logarithmic chart connecting the highs. Typically price bounces off the trendline giving it the apparance of multiple pegs on a clothesline. Can be used as a price target or to time climax moves and short setups. The longer the duration the better.

Test Low volume retests. Price testing a prior low (high) w/o an undercut on muted volume and a general lack of selling (buying) interest. This gives big operators the confirmation that sellers (buyers) are absorbed and that they can now finally start their accumulation (distribution) campaign. Follow them!

#MGS Momentum Gap setup. A breakway or runaway momentum gap. This occurs after earnings in almost all cases. However it can also be triggered by any other catalyst causing a meaningful overnight gap.

Gap An overnight gap in the price of a stock. Stocks don’t like gaps and they are often filled. ‘Often’ is an understatement!

#FHS Fishhook setup. This is basically a multi day retest of the lows of an earnings momentum gap setup. Can be used to layer into MGS’s.

#ten +10% intraday scale-out rule. When a stock is up around 10% intraday I typically scale-out some into strength in order to make it more easy to secure my desired risk multiple winners. Be aware of support and resistance levels as they can interfere.

#ORB Opening range breakout. This is a technique which can be used to buy into or better yet scale-into breakaway moves. Once price exceeds the highs of the first 15-min bar of the session, it is considered a 15min ORB. I mostly use these as an additional scale-in technique for the momentum gap setup on gap-up day.

If your question is reasonable it will be added to our Q&A knowledge base.

The content of this article reflects our own opinion which stems from our own experience gathered trading real money in the stock market. It represents our style and it suits our personality and risk allowance and it may or may not suit yours. Please refer to our honest risk disclaimer for further information regarding the severe risks associated with active trading of the financial markets and in relation to financial products in general.