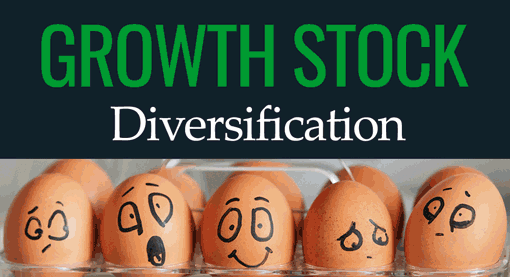 Diversification is probably the most prominent topic in all of stock trading. Even if you never ever traded a stock in your life, chances are high that you are already familiar with the concept. It is also the first layer of any risk management approach out there. No matter which style you use you certainly must diversify in order to reduce or dilute your risk, right?

The answer to this is not as straight forward as one might think.

Diversification as a cheap insurance

The basic idea is as follows, you hold 5 to 10 stocks in your portfolio so that it doesn’t hurt too much if a single stock implodes. The math is straight forward. If you hold two stocks than a 100% decline in on of your holdings results in a 50% portfolio hit. One stock imploding in a 4 stock portfolio translates to a 25% account hit. The following -well known- graph illustrates this simple dependency.

You simply hold a couple stocks in your portfolio so that a single event, such as an overnight earnings gap down or a negative FDA decision doesn’t hurt too much. From the graph it is clear that after 5 to 6 holdings the effect sees dimishing returns.

This cheap insurance against single stock black swan events is nice but what happens if the market as a whole goes down?

In such a case diversification typically refers to a portfolio consisting of various holdings which are not or only loosly correlated so that your portfolio has the potential to advance even when one category of investments is hit hard. While this approach is helpful if you are running a billion dollar fund it is detrimental to performance for us smaller traders with portfolio sizes below 50M. In the end you want to use your buying power to engage in high flying innovative growth stocks and not some low beta juggernauts just because they theoretically reduce or dilute your risk on paper.

To make a long story short, diversification in the classic sense is ill-adviced. When the sky is falling and you hold solely growth stocks, your portfolio typically falls even more.

My little -QE age- study to validate my point

I conduced a little study to figure out how the biggest stock market winners over the last 5 years performed against the broad market during intermediate and major market corrections. For this purpose I picked the following four market declines in the nasdaq composite.

I only considered growth stock leaders which actually made fresh highs after the respective corrections and ignored those which never recovered. I made a handful of exceptions for the last 24% market decline where I included stocks like NVDA and FB despite the fact that they are still trading below their respective pivots.

I measured the relative strength of each growth stock leader vs the market in each of those corrections if available. Performance of VIPS for example is only measured during 2014 when the name was a leader.

I found that there is no major difference between the four corrections (see table below) thus it was reasonable to simply combine the results into one big dataset.

Here is the complete list of the 77 growth stock leaders included in this study:

If a major one is missing please let me know, but be assured that it won’t have a significant impact on the end result as the sample size was large enough with a total of 247 datapoints.

The following graph shows the relative performance of the complete list of 77 growth stocks from above.

How to read the graph above:

From the graph above it is clear that the growth stock leaders have a slightly skewed distribution with a heavier left tail showing an underperformance of -30% vs. the market on average. The top outperformer was NTES with +230% during the -24% correction in ’18 and the biggest loser was FANG with -245% during the -11% correction in ’14.

But I only Traded the Monster stocks so this does not apply to me right?

Imagine if you had been super lucky with your stock picks and managed to always trade among the very best of the 77 growth stock leaders. I am refering to those 23 names which managed to advance more than 400% overall from 2014 to 2019.

From the green distribution in the graph below it is clear that those 23 top stocks (including names such as WB, AMZN, NVDA, SQ, SHOP, ABMD) underperformed even more. On average these monster stocks underperformed the broad market by -60% during the corrections!

The green distribution is also heavily skewed with only 9% of the stocks outperforming the market slightly (> 0%) and only 4% making net profits (> +100%). Those 4% actually translate to the following 3 stocks:

What is also noticeable is the fact that there is a steep cliff or sharp drop around 0%. This means that the very best stocks rarely do better than the market during corrections.

This is on stark contrast to the complete list off 77 growth stock leaders which do show a good amount of stocks >0%. This difference between the good and the very best is a surprising observation which I did not expect to see to be honest.

Outperformance during broad market corrections is certainly not the business of the monster stocks as they rarely do better than the market. Click to Tweet

It should be clear by now that if have been super lucky, catching all the monster stocks (Those who made between 400 and 2200% within half a decade), you actually felt a lot more pain during the various market corrections compared to the broader base of 77 growth stock leaders (those who made ‘only’ between 95% and 400% over those 5 years).

You might ask why that is a problem because you certainly made insane profits riding those crazy +400% moves!

The answer is surprisingly simply.

The pain would have been real as -60% on average means that your stocks corrected 40% on average during the -24% Q4 ’18 correction.

Now imaging you held only the two names witch corrected -200% (NFLX and ABMD). That would translate to your portfolio declining -72% (-24% multiplied by three) during the Q4 2018 decline.

Ouch! That is an unbearable amount of pain already!

And now consider that I did not even include names which broke down for real over the years never recovering at all. Imagine you held one of them!

And now go even one step further and imagine such a -24% correction turns into another collapse like in 2008 or the historical 30% Pandemic drop in 2020.

The 2008 market collapse was mayhem for those poor souls who thought that they applied proper risk management by diversifying their portfolio with 15 different growth stock leaders. Click to Tweet

What diversification can and can’t do for you

The following graph is a simple random walk or monte carlo simulation based on the green distribution of the top 23 leaders from the graph above.

Deep Info: I uses a mixed gaussian distribution in order to account for the skewness and the long and narrow upper tails. The fit isn’t perfect as the biggest outperformer at +230% drops out but it is good enough to illustrate the point.

This is what diversification can and can’t do for you if you traded only among the monster stocks over the last 5 years.

‘Diversification’ or holding multiple stocks hence can yield the following results for you:

If you are a swing or position trader trying to catch the monster stocks you must make sure to get out in time during any intermediate market correction as diversification simply does not work in your case. Click to Tweet

How many stocks to own?

In my opinion it is prudent to hold anywhere between 4 to 7 stocks to protect yourself against single stock black swan events and to make sure to completely step aside or dodge any intermediate market correction!

Depending on your winrate you have to alter the number of holdings in order to smooth out the equity curve. But that will be covered in another article.

I give you a range because position sizing should be based on logical stop loss and price target levels of individual stocks and therefore the exact position size varies from trade to trade. It makes no sense to work with identical position sizes as stocks are not acting the same you know.

Yet some lazy traders try to simplify money management and position sizing for no reason. But this topic will also be covered in a future article.

With a small portfolio <200k consider holding 3 to 4 stocks to be 100% invested. This works out to be 33% and 25% on average for each stock, respectively. If you can’t watch your stocks during market hours like a hawk you can go as high as 5 or even 7.

You can then use margin to either increase the number of stock holdings (7 should still be the max) or add to the exisiting ones. I often use margin (sometimes even >200%) to enter intraday swing trade ideas with a large position which I cut back down end of day if the anticipated move is absent.

With larger accounts you can increase the number of stocks to hold up to 8 or 12 for being 100% invested. This will reduce the growth rate of your account because you can focus on only so many stocks at a time before it will be detrimental to performance.

And don’t you argue with me over that, it is a fact and you are no special snowflake! Dilution of your attention is no joke in trading and trying to ride too many stocks is stressful and can be the root of all evil!

You can certainly make profits during market correction on the long side by engaging in brief swing trades in small to mid cap speculative names but sitting tight in the monster stocks won’t work unless you have an insane risk tolerance.

However if a correction decides to go as deep as -40 to -60% no risk tolerance in the world will save your poor soul as your account will simply evaporate into thin air.

To end this one on a positive note I am happy to tell you that timing the market and getting out way ahead of any serious intermediate correction is not rocket science.

But you probably grasp that already if you followed me on twitter for a while!

Feed back will help me improve!

If your question is reasonable it will be answered in our Q&A knowledge base.

The content of this article is my opinion which stems from my own experience gathered trading real money in the stock market. It represents my style and it suits my personality and risk allowance and it may or may not suit yours. Please refer to my honest risk warning for further information regarding the risks associated with active stock trading.

NO SPAM OR RECURRING MAILS